paradise now 2.0 is a spacial audio-video-installation based on a historical film excerpt that questions the hierarchies of performativity and text culture. The artwork starts out with a historical perspective concerning a discourse on text and body within performance studies that is regarded as an area of social and political debate. Taking a film scene of the performance Paradise Now in the 1960s by the post-dramatic theatre group The Living Theatre as his point of origin, The work addresses issues on the current relationship of body and digital code. The body-centered performative practice of the 1960s marks a form of resistance as artistic expression in a time when ideas of autonomy, individuality and collectivity were newly formulated and have evolved to different contradictory meanings today. The installation paradise now 2.0, which incorporates the actual presence of its audience, explores the performance of text (code) and body (community) in its historical and current logic as well as its very relation. 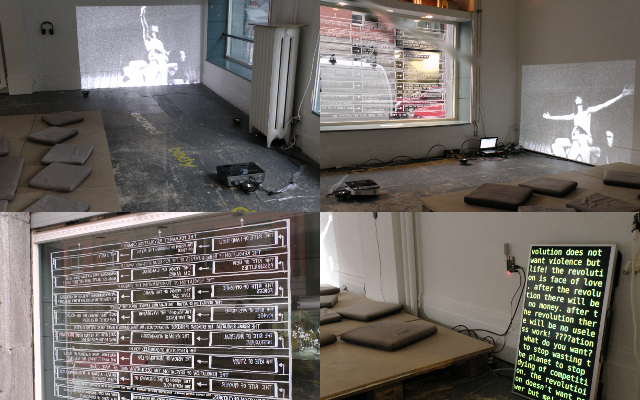