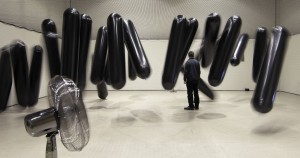 In this installation, 30 black balloons, filled with Helium, hover freely in space, suspended in a state of limbo, kept in subtle motion by an intermittent breeze of air. The audience is free to play with these balloons, yet a wall painted tag says:
SUPER-EXTRA DON’T MOVE!
A sound system emits standing waves and tracks the sonic feedback in order to monitor the positions and changing configurations of the balloons. The system calculates and modifies its sound frequencies according to the locations of the balloons, thus creating a resounding ambience in the space.