„Paradise Now“ is an interactive audio-video installation that deals with the politics of body. A body, that will be written, inscribed by scripts and codes and a body that is more and more be required to also write as performer. Jean-Luc Nancy writes in his book „Corpus“ about the relations between writing and body: Writing: touching upon extremity. How, then, are we to touch upon the body, rather than signify it or make it signify? It’s tempting to reply, rashly, either that it’s impossible, that the body’s uninscribable, or that it’s a question of mimicking or merging the body with writing (dancing, bleeding … ). Unavoidable answers, no doubt, but hasty, conventional, and inadequate.“ The work „paradise now“ looks back in time to the U.S. theater performance group „The Living Theatre“ from 1968 and re-questioning this material. How is the relation of body and politics and how does performativity creates resistance in an actual everywhere surrroundig sphere of new scripts, written and executed by digital technologies. Scripts that invites us to always perform because to do so is what is asked of us. „paradise now“ deals with this idea of performativity between doing and not doing as a collective space. 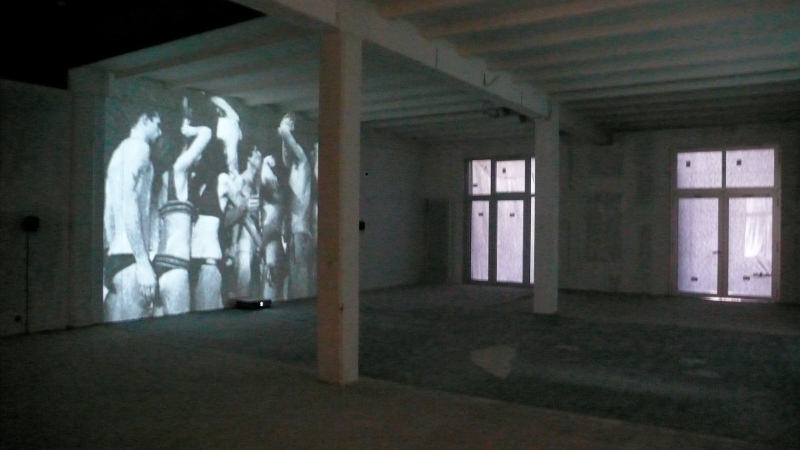 The project refers to the equally named play called „Paradise Now“, which was first performed by the theater group in Avignon (France) 1968. A brief excerpt from the historic B/W film documents (which have recently been released on DVD) is used as the material for the installation. The participants of the drama group accusing about a repressive capitalist society, while they form a collective community and a choir, dressed only in a loincloth. They talk/sing the following:

Due to digital recalculation, the movie images and sounds of the original film recordings will be projected in the space. Two video projections show two different versions of the video. The sound is recalculated from the original soundtrack and will be heard on a four channel soundsystem. The video is played by a sonic tracking system which reacts on acoustic resonance shifts in the space. Any movement of visitors will bring the playback out of freeze state and the words and sentences become alive.